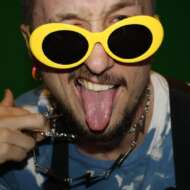 'Drama the Artist' is a National touring artist from Lincoln Nebraska.
Starting off at a young age with a passion for music it quickly became apparent to those around him that he would permanently be infatuated with creating it. Getting his start in small time bands, he eventually went solo to pursue being able to create freely. Priding himself on his versatility and his ability to write clean hooks he mainly makes what he likes to call “Punk Rap” which is made up of hard, punchy lyricism with Smooth, Melodic choruses. He doesn’t like to be defined by one style of music or genre however. Songs like his pop smash sensation "Hurricane" and Moody punkish Acoustic Ballads like "Don't Wanna Die(Campfire Song)" and "Apocalypse" are sure to give you a deeper understanding of the emotional side of Drama. His lyrics reflect heavily on human emotion and pain, but has no shortage of what he calls "fun music."  The consistent themes you see in his message are "Growth and Perseverance with no shortage of Love" His constant Journey is striving to make music that is catchy, fun, and freeing, but with a serious undertone and a real message.
Live Performances have been a staple in his career logging over 100 shows, and opening for big names like Tech N9ne, Caskey, Doobie, Smokepurpp,and many more. People have described Drama's live performances as "Powerful and Packed with Energy and Emotion." He is currently working on his Third Studio album "Art Work" and preparing for the third leg of the 'Astronauts Tour'

Drama the Artist was born in Omaha NE. He graduated from Nebraska Lutheran High School in Waco NE and currently resides in Lincoln NE.

"Hungry Dogs around me. Who would I be not to feed them? Handing plates out making sure everyone eatin'; Have Faith in me, Why the hell you not believing? You only get help from the gods that you believe in" (2 Fast ft Faro Gee)

"I don't wanna Die Quite yet. I haven't lived Life Quite yet. Some pills are hard to swallow, Impossible to forget. the shortest end of the stick is the one i always get.." (Campfire Song)

"They Say there's angels watching over us, I hope they watching you. I hope they helping with your problems, hope you make it through. I'm on a wave right now making major moves. Thank the universe and my team that I'm able to." (Angels)

"I go to hell like what's up satan! I'm bout to take over the nation. I got the juice like a substation. I need a vacation because this here is my vocation" (Moonrocks)

"I got the Sauce, I got the drippppp shawty. I'm in the Hoss, yeah issa big bodyyyy (Sauce ft Psykes)

"Drama The Artist knew he had to go bigger, harder, and more epic than ever before to establish his name permanently in the game with the very best of the best. It was never simply making another great record listeners could turn up – the real mission has always been about changing the world by creating an unforgettable experience in music unlike any other"